0
30 June 2020 The Balkan lynx (Lynx lynx balcanicus) is a distinct subspecies and the most threatened population of Eurasian lynx in the world: with fewer than 50 individuals remaining, it is classified as Critically Endangered (CR) in the IUCN Red List. The Balkan lynx has been listed in Annex II of the Bern Convention (Convention on the Conservation of European Wildlife and Natural Habitats), which foresees stricter protection of the subspecies in range countries, and fosters transboundary cooperation for its conservation. The listing entails that range countries are obliged to take maximum efforts for ensuring the survival and improvement of the population as well as prey and habitat for lynx. Its continuous presence and reproduction in North Macedonia and Albania has so far been confirmed in just two locations: Mavrovo National Park and surroundings and Munella mountain and surroundings. In April 2020, researchers in Albania also confirmed reproduction of Balkan lynx in the Polis-Gur i Zi-Valamare mountains in central Albania. In late May 2020, the nature conservation organization PPNEA (Protection and Preservation of Natural Environment in Albania), which has been working on the conservation of Balkan lynx in Albania for more than 15 years, was notified by network members about a freshly killed Balkan lynx in the mountains of central Albania. The case was reported from the restaurant Ke-Rrema in the city of Elbasan, which has already been flaunting two taxidermied  Balkan lynx individuals in its premises since at least January 2017 (Fig. 1). This restaurant has been identified by PPNEA as a ‘hub’ of wildlife crime where, besides Balkan lynx, taxidermied specimens of brown bear (Ursus arctos) and roe deer (Capreolus capreolus), both protected by Albanian law, were exhibited and various dishes of wild game offered despite the current national hunting ban. 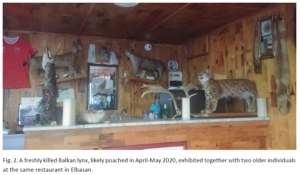 With consideration of the precarious status of the Balkan lynx population in Albania and the wider region, as well as the strictly protection status that the species enjoys both on the national and international level, PPNEA denounced this case of poaching to the Prosecutor in Tirana on 5th June 2020. All evidence and information were provided to the Prosecutor. Unfortunately, the response by the authorities was not up to par and no concrete action was taken even after several days. PPNEA, on its own, managed to get photographic evidence of the third (freshly killed) Balkan lynx individual, which was meanwhile taxidermied and exhibited in the interior of the restaurant, next to the two older individuals (Fig. 2). Again, evidence was submitted to the prosecutor, but no concrete action was taken. The continued institutional apathy and non-responsiveness of the Albanian authorities obliged PPNEA to denounce the case to the media both nationally and internationally. An article was published in the daily French newspaper ‘Liberation’, followed by a multitude of articles in Albanian media. The Ministry of Tourism and Environment of Albania called an urgent meeting on 23rd June 2020. PPNEA reported the details of the case directly to the Minister during the meeting. As of 26th June 2020, there is still no sign of action by the Albanian authorities to resolve the case and nobody has been held accountable for the killing of this critically endangered felid. In accordance with the Albanian penal code, the killing of protected species is punishable by up to seven (7) years in prison. PPNEA lynx experts analyzed the photographic evidence of the killed individual in comparison with existing camera-trap photographs from the region. The killed animal seems to be an individual that had been photographed by camera-trap in Elbasan region (Stravaj Nature Reserve) in December 2018 by the Regional Administration of Protected Areas of Elbasan (Fig. 3). This provides unequivocal proof that this individual came from the Balkan lynx population in the Elbasan region of Albania. Unfortunately, this is not an isolated case of Balkan lynx poaching in recent years. Altogether, in the entire range of the subspecies in the SW Balkans, partners of the Balkan Lynx Recovery Programme have evidence of 14 individuals poached /illegally killed since 2006. Considering the extremely small size of the population and that usually the number of known cases of poaching are only the ‘tip of the iceberg’, this number is shocking and confirms that poaching is a major threat to the survival of the Balkan lynx in the wild. We call upon the Albanian authorities to address this case with renewed urgency and vigor in order to bring the offenders to justice in accordance with Albanian legislation and in compliance with the international treaties that Albania has signed. The critical status of the Balkan lynx entails that the loss of even a single individual can jeopardize the survival of the entire population. Maximum effort should be taken so that the law adequately addresses cases of poaching, in order to minimize the risk of such occurrences happening again in the future, thereby bringing the Balkan lynx one step closer to extinction. https://www.facebook.com/LCIEIUCN/posts/1140431679677347
Share on Facebook Share on twitter