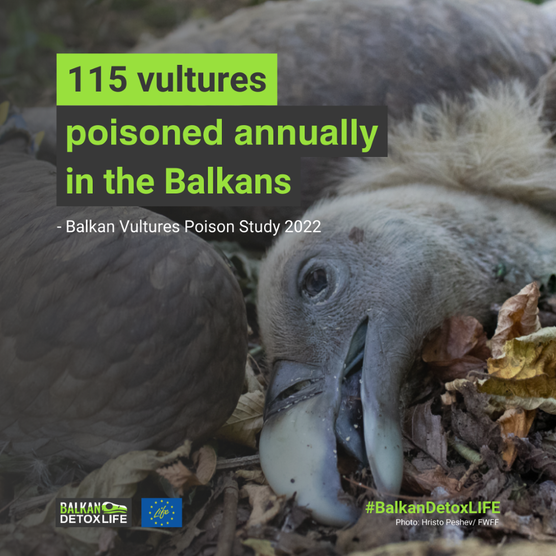 The illegal use of poisonous substances in the environment to target ‘undesirable’ animals depletes biodiversity and threatens public health, yet it continues to go unnoticed and unpunished according to the new Balkan Vultures Poison Study 2022 by the BalkanDetox LIFE project, funded by the EU’s LIFE Programme.

Between 2000 to 2020, the study period, 1046 poisoning and presumable wildlife poisoning events have been recorded across Albania, Bosnia and Herzegovina, Bulgaria, Croatia, Greece, the Republic of North Macedonia, and Serbia. The main motive behind poisoning incidents appears to be conflicts with mammalian predators (mainly wolves, foxes, jackals and bears) for the potential damages they may cause to livestock practices, agricultural production and game animals in hunting areas.

“This practice is not a solution to resolve human-wildlife conflicts. It is an unselective method of killing animals that also puts endangered species and unaware citizens, including children, in danger,” states Uroš Pantović, BalkanDetox LIFE project coordinator.

Carbamates, especially Carbofuran, were detected in almost every second poisoning event. Carbofuran is a banned pesticide considered a human health hazard since only 0.5 milligrams are enought to kill 21 people.

Driving vulture and other protected species populations to extinction

Avian scavengers typically suffer the most from illegal wildlife poisoning, non-more so than vultures, which are recorded as casualties in every fourth incident. A total of 465 vultures perished in the Balkan Peninsula, including 47 Egyptian Vultures, 17 Cinereous Vultures and one Bearded Vulture between 2000-2020. The region’s Griffon Vulture population suffered the worst, with 400 individuals perishing within 233 separate poisoning or presumable poisoning incidents. The Common Buzzard and Red Fox closely follow, with 392 individuals within 190 separate incidents and 389 individuals within 141 separate incidents, respectively.

“An estimated 115 vultures are potentially being poisoned to death annually throughout the Balkans if we take into account that approximately less than 20% of poisoning incidents are ever discovered and documented,” states Jovan Andevski, the Vulture Conservation Foundation’s Programme Manager.

Such losses exact a heavy toll on the region’s vulture populations, and have lead to regional and local extinction of certain species. Wildlife poisoning continues to be the single most important threat to vultures in the Balkan Peninsula and current limiting factor for their recovery. This factor has to be taken into account when planning any conservation initiatives regarding vultures, especially restocking and reintroduction initiatives.

Urgent need to combat wildlife poisoning in the Balkans

Low awareness, insufficient engagement of relevant governmental authorities, unclear legislation and jurisdictions, and a lack of resources and capacities when it comes to dealing with poisoning incidents represent the main challenges in effectively combating this problem in the Balkans.

Tackling illegal wildlife poisoning requires a multidisciplinary approach and joint efforts by multiple stakeholders. The BalkanDetox LIFE project will raise awareness about the severity of this practice to mark it as a socially unacceptable phenomenon in the eyes of the public.

The project further strives to engage the relevant authorities and build capacities through the Wildlife Crime Academy and other training initiatives to improve the investigation and management of poisoning incidents.

It will also facilitate the development of more efficient, clear-cut standard operational protocols for describing responsibilities in reporting, investigating and managing wildlife poisoning cases based on best practice examples from countries.

Additionally, the project will enhance communication and information exchange between responsible institutions and sectors related to jurisdiction to expediate judiciary proceedings of wildlife poisoning incidents.

About the BalkanDetox LIFE project

The BalkanDetox LIFE project is a five-year endeavour with a €1.8 million budget, which aims to raise awareness and strengthen national capacities to fight the problem of wildlife poisoning across seven Balkan countries. It received funding from the EU’s LIFE Programme, and it is co-financed by the Vulture Conservation Foundation (VCF), the MAVA Foundation and Euronatur . It is led by the VCF and PPNEA is the responsible beneficiary for actions in Albania.