Common quail: A #FlightforSurvival under the threat of illegal hunting

0
September is the peak of migration for the #magnificentquail, a journey that resembles a flight for survival. Along such odyssey, from south-east Europe to sub-Saharan Africa, this beautiful species faces the constant threat of poaching.
Even though this species has been hunted for centuries, the population of common quail (Coturnix coturnix) was always stable and strong. Only when techniques like electronic calling devices are being used at trapping sites on busy migratory routes, the population of common quail has started to decrease.
Albania represents an important area into the Adriatic flyway corridor, and also a hotspot for illegal killing of birds with means of electronic bird sound callers. Such equipment has the potential to gather a large number of birds into a specific area, making them an easy target for poachers.
PPNEA calls on the authorities to address the utilization of electronic bird sound callers that can be heard easily during the night into rural areas of Albania. Furthermore, we call on everyone who encounters cases of illegal hunting to report them immediately. 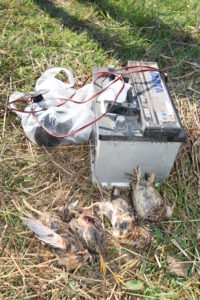